U.S. Route 66 is perhaps the most famous road in America. The Mother Road, as it was known, passed through 8 states—Illinois, Missouri, Kansas, Oklahoma, Texas, New Mexico, Arizona and California from 1923 until 1985, when it was officially removed from the U.S. Highway System. Celebrated in song, TV Series, and literature, Route 66 is a shadow of its former self, but lives on as a National Scenic Byway with a dedicated community of supporters through the Route 66 Associations, the first of which was established in Seligman, Arizona, in 1987.

Through Arizona, Historic Route 66 is mostly submerged below Interstate 40 from the eastern border with New Mexico, but a section of the original road departs northwestward from I-40 at Seligman (west of Flagstaff) and continues through Peach Springs (the center of the Hualapai Tribal Nation) and then on to Kingman. 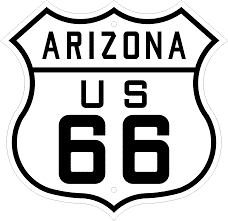 On Saturday, May 4, the third day of our road trip, we departed Fort Mojave for the Tesla Supercharger in Kingman before heading out on Historic Route 66 to Peach Springs. Along the way, we noticed a fair number of historic mid-20th Century automobiles heading the opposite direction and wondered if this was a regular thing or something special. It was not until we reached Peach Springs that we learned that we were amidst the 32nd Annual Route 66 Fun Run hosted by the Route 66 Association of Arizona. The annual Fun Run sees over 800 entrants drive Historic Route 66 from Seligman to Topock, Arizona (about 50 miles Southwest of Kingman) and return. See here for the 2019 Fun Run Schedule of Events we happened upon.

This could not have been better for us as we were treated to the perfect match of road culture and Hualapai culture. At Peach Springs, we visited the Hualapai Cultural Center and experienced outstanding Hualapai native drumming, bead-making, and live music.

There, we also met a father-son duo with reconditioned 1950’s classics—a 1957 Ford Thunderbird and a Chevrolet Bel Air Station Wagon; both red, so we had to take photos of our cars together. Neither had even sat in a Tesla, so I took them separately for a short demonstration of the Tesla Model 3’s capabilities.

The Hualapai Nation of approximately 2,300 tribal members sits on about one million acres of land along 108 miles the Western part of the Grand Canyon and Colorado River across 3 Arizona counties (Coconino, Yavapai, and Mohave).

Also at Peach Springs, the Hualapai Nation (#hualapai) operates the Hualapai Lodge, a 54-room hotel with Hualapai artwork, a gift shop with Hualapai art and gifts for purchase, and family-style dining at the Diamond Creek Restaurant. Grand Canyon West (#grandcanyonwest), the Tribe’s recreation business, operates helicopter tours, whitewater rafting on the Colorado River, and the Grand Canyon Skywalk at Eagle Point, together making Peach Springs a fabulous destination for weekend and vacation visits.

Ideally, we would like to see Hualapai Lodge at Peach Springs (and other tourism locations in Arizona’s tribal lands) join the Tesla Destination Charger Network. Tesla will put your location on its online map (see sample listing below). Tesla currently represents 32 percent of U.S. sales of battery electric vehicles (BEVs). See Becoming a Charging Partner for information on getting Tesla Destination Chargers installed at Hualapai Lodge. 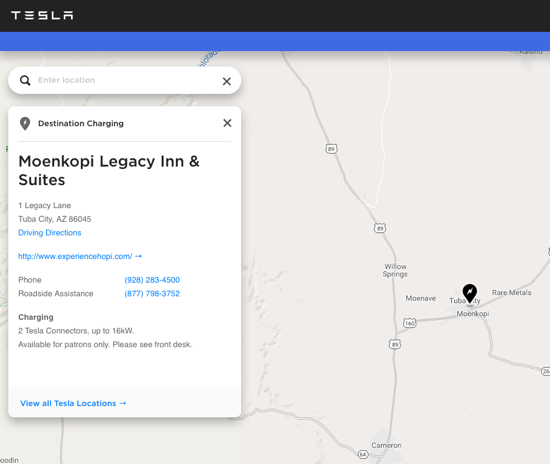 Chargers for non-Tesla electric vehicles (chargepointe.com, evgo.com) would also be a good idea.  By 2015, there will be 100 electric vehicle brands sold in the U.S. and doing this would certainly bring electric road trippers to spend the night in Peach Springs and very likely partake in the recreational opportunities offered by Grand Canyon West. Electric vehicle owners make very attractive new and repeat customers. They earn twice the average U.S. income, tend to be highly educated, and are known to support the businesses that provide charging.

We will be back for next year’s 33rd Annual Route 66 Fun Run – May 1st-3rd, 2020 and will plan to bring a contingent of other Tesla (and other EV) owners with us. The map below provides the route (including Tesla Superchargers) from Phoenix. It sure would be nice to stay in Peach Springs on Saturday night. 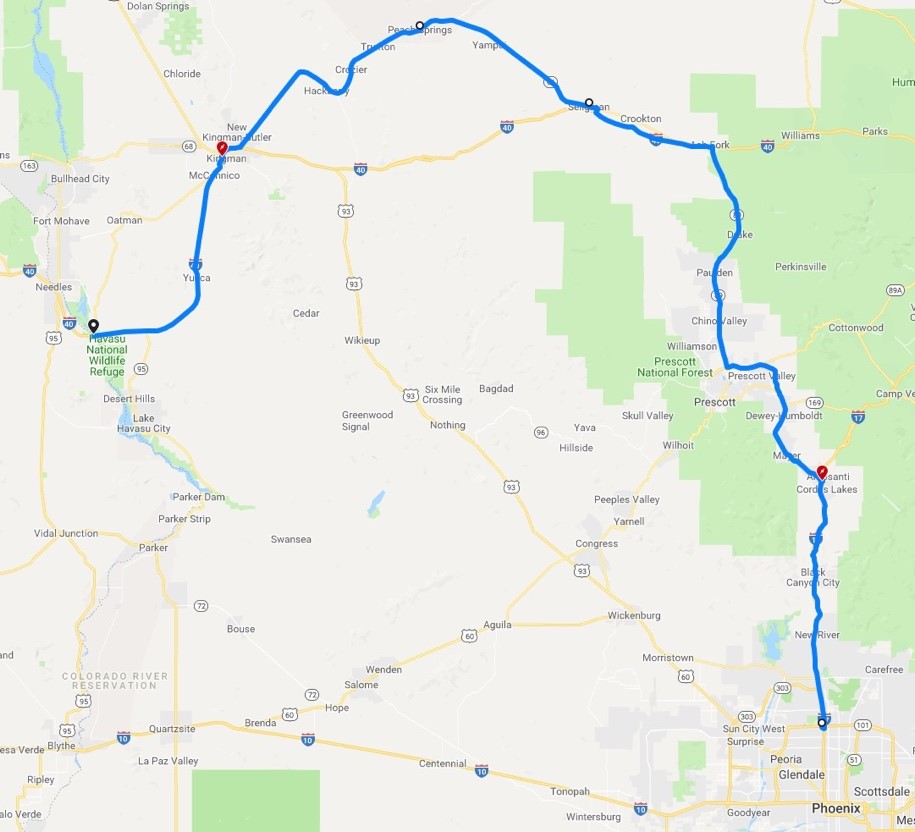