Even though these tribes all have a common language base, different Tribes have different roots. For example, the Cocopah language, which the tribe calls, “Kuapá” from Delta-California is considered a language of Mexico, and the Pai languages (Havasupai-Hualapai-Yavapai) and the River languages (Maricopa, Mohave, and Quechan) are languages of the United States. However, all are “Cochimi-Yuman,” which is the aboriginal root from the pre-historic Patayan group.

The Maricopa (Pipa, Pipatsje, Piipaash) #srpmic “people” were originally from the Xalchidom Tribe along the banks of the Colorado River, but migrated to the Gila River and joined with the Pima for mutual protection from common enemies (which included the Mojave and Quechan). Today, the Maricopa are found at the Salt River-Pima-Maricopa Indian Community (east of Scottsdale, Arizona ) and the Gila River Indian Community (south of Chandler, Arizona).

On Day 2 of our trip, we visited 4 reservations—the Cocopah, Quechan, and Mojave at CRIT and Fort Mohave. These tribes traditionally employed flood-plain agriculture along the river, however, the modern day reservations all have casinos and other recreational venues for their primary economic means.

The Cocopa (Kwi-ka-pa) #cocopah The Sovereign Nation of the Cocopahs is on 6,500 acres in Somerton, Arizona, 13 miles south of the City of Yuma, Arizona (and borders Arizona, California and Mexico. There are 1,000 tribal members and the tribe operates a number of entertainment venues including a Casino Resort. To learn more about the tribe’s culture and history, visit the Cocopah Museum and Cultural Center, which we very much enjoyed.

The Quechan Indian Tribe, pronounced ke-chan’ (Kwatsáan) #kwatsaan, meaning “those who descended,” is located at Fort Yuma on 45,000 acres along both sides of the Colorado River just north and East of the City, where there are over 3,200 tribal members. The Tribe also operates two casinos in the area.

The Colorado Indian Tribes (CRIT) #CRIT comprise four distinct Tribes – the Mohave, Chemehuevi, Hopi and Navajo. The Reservation was originally created for the Mohave and Chemehuevi Tribes who had occupied the area for Centuries, and the Hopis and Navajos were relocated to the area in later years. There are currently about 4,277 active Tribal members on nearly 300,000 acres of land embanking the Colorado River in both Arizona and California, (90 river-miles) centered in Parker, Arizona. Primarily an agricultural community, the Tribe also operates the BlueWater Resort & Casino in Parker, Arizona. The CRIT own the rights to 662,000 acre-feet of Colorado River water, which is equal to roughly half of the water that the Central Arizona Project (CAP) canal delivers to Phoenix and Tucson annually and have the highest priority during shortages.

The Fort Mojave Indian Tribe #fortmojave (Pipa Aha Macave) “The People by the River” trace their origins to Spirit Mountain, the highest peak in the Newberry Mountains northwest of the Reservation. Their tribal center is in Needles, California, but the Reservation covers 42,000 acres on both sides of the Colorado River, but nearly two-thirds of the land is in Arizona. The tribe operates two Casinos in Laughlin, Nevada—Mojave Resort & Huukan Golf Club and Avi Resort & Casino, where we spent the second night on our road trip. Mojave art and history exhibits can be found at Avi Casino (see photos). 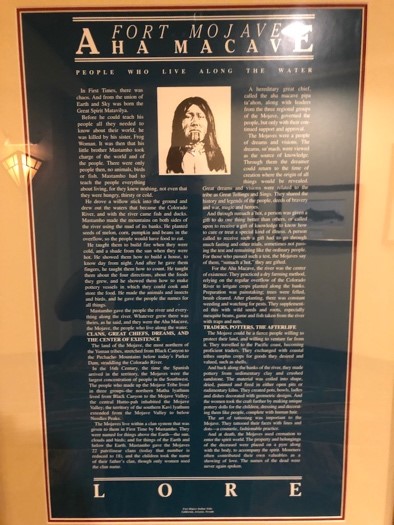 The culture and history of these sovereign nations is fascinating, and as the summer is rapidly approaching, I encourage readers to consider visiting our tribal neighbors, especially those on the Colorado River with casino resorts and other recreational opportunities.

For Tesla owners, there are Superchargers in Yuma, Quartzite, Needles, and Kingman, providing ample opportunities to travel.