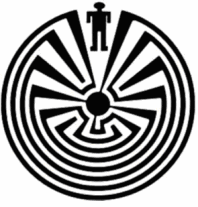 The Great Seal of the Salt River Pima-Maricopa Indian Community is an ancient pattern of the Southern Arizona tribes. The pattern represents the MAZE, or house of “Se-eh-ha” (Elder Brother). The maze depicts experiences and choices we make in our journey through life. It illustrates the search for balance – physical, social, mental and spiritual. In the middle of the maze are found a person’s dreams and goals. Legend says when we reach the center, the Sun God is there to greet us, bless us and pass us into the next world. – Salt River Pima-Maricopa Indian Community.

I came from an immigrant family—Ashkenazi Jews (from Russia, Ukraine and Austria) on both sides of my family who, early in the 20th Century, emigrated to the United States and settled in New York, Connecticut and Massachusetts to seek a better life. Grandparents on both my mother’s and my father’s side of the family escaped genocide, forced migrations, and ethnic cleansing in Europe in the late 19th and early 20th Centuries.

My father was a commissioned officer in the Allied Military Government, European Theater of Operations in World War II, and a lawyer and accountant in private practice in New York. He worked hard, was rarely home and passed from cancer three days before my 10th birthday.

My mother was also an attorney in private practice in New York. She was modern by her generation’s standards, secular, President of her local League of Women Voters, active in New York’s art and theatre scene, with a strong ethos of hard work and social justice. She was my role model and never gave up on me, though she did say later that my adolescence “prematurely aged her.” Five years after my father’s untimely death, she remarried.

My stepfather, whose surname my sister and I adopted, was a character—also a secular Jew, a corporate lawyer and lay poet whose lifestyle paralleled my mother’s. A civil libertarian, he successfully represented blacklisted entertainers, producers and writers during the McCarthy Era.

I grew up in a small town in the Hudson River Valley—a river town in New York’s Upper Westchester County. Although I knew that indigenous peoples had lived there prior to the arrival of Dutch settlers, my knowledge of “Indian” Tribes in the area was limited by the education I was provided in the local grade schools at the time—a narrative of settlers arriving to a sparsely populated land, “ranged by a few thousand savages,” and the doctrine of “Manifest Destiny,” which held that the United States was destined by the Judeo-Christian God to expand its dominion and spread democracy and capitalism across the entire North American continent. This narrative was fostered by the popular culture of the time, such as the “Western” genre of films of the time.

Three books I read over the decades since the Wounded Knee Incident in 1973 changed that perception for me. In my last year of high school, I read Dee Brown’s “Bury My Heart at Wounded Knee,” a wake-up call that America’s origin story was a myth. Here I learned that the means in achieving, America’s expanding “dominion” included genocide, forced migrations, and ethnic cleansing; that all indigenous tribes were forced out of the East to be corralled onto reservations in the West, oftentimes far from their native lands, and had their children taken away, robbed of their cultural heritage to assimilate.

Of course, we don’t tell our children about the “bad stuff” America’s founders did and since there were no Indian Reservations in Westchester County, I had no reason to believe the narrative was false. However, indigenous peoples did live in my home town, as early as 4950 BC and the Kitchawanc Tribe, part of the Wappinger Confederacy of the Algonquin Nation, were living there when Dutch settlers arrived. My home town, according to accounts, is named for a Kitchawanc Chief named “Kenoten.” But what happened to them and the other Eastern Tribes? As it turns out, they were relocated, ethnically cleansed, and worse.

For many reasons, I had to get away from New York…too cold, too congested…concrete and steel canyons, gloomy weather, false history, family pressure…it was time to strike out on my own. The West beckoned with wide open spaces, the frontier, “Go west young man and grow up with the country.” So, I left. I must have had the migration gene my grandparents had. I would go west, perhaps to find the Kitchawanc…

I moved from New York to Arizona in 1976 to seek my fortunes on my own terms in the midst of my already crazy adolescence where I immediately fell in love with the desert. Over the next 5 years, I took some risks; sometimes failing spectacularly, faced death, faced bankruptcy, but persevered.

Continuing my exploration of American history in Arizona in the late 90s, I read “Killing the White Man’s Indian: Reinventing Native Americans at the End of the Twentieth Century,” by Historian Fergus M. Bordewich, and most recently, “An Indigenous Peoples’ History of the United States,” a scholarly work by Roxanne Dunbar-Ortiz that, in my view, should be required reading in every high school in America.

Sometime in the mid-1980s, I was invited by a friend to join her in attending a “Sweat Lodge” conducted by a spiritual leader at the Gila Indian Reservation, set up through the Heard Museum. The sweat lodge is a purification ceremony inside a round structure made of Ocotillo, dried Saguaro Cactus, and other natural materials, bound with twine and covered in large blankets. Heated stones are placed in the center.

The ritual began in the mid-afternoon with the building of a large bonfire to heat stones. Both men and women participated, though there were more women, and I was one of only 3 non-tribal guests. While the bonfire burned, three tribal members crowded around a large drum and beat the drum in unison, chanting. This went on until the fire died down at dusk.

Before we entered the “lodge,” we were told that it would get quite hot in there (perhaps stifling) and that once it began, we could not leave as it would disrupt the ceremony, so we were told that if we felt like we were going to faint, to lay down close to the ground at the back of the lodge where the air is coolest.

Then the men stripped down to just shorts and the women to bra and shorts and we retired to the inside of two lodges (one for men and one for women). I was the only non-tribal participant in the men’s lodge. We sat around a small pit in the center, knee to knee and an attendant brought a number of the hot stones inside to the center of the structure and then, after providing us with water to drink during the ceremony, left, closing the flap. All we could see is the glow of the rocks.

The spiritual leader began the ceremony by lighting a small candle and placing sacred herbs and water on the stones, thus creating an intimate circle of men in sauna-like conditions. Then the leader said a prayer in his native language, then translating it and invited each of us to sing a song of meaning and/or speak a prayer and then express our fears and hopes to the group, beginning with the four directions. The Sweat Lodge, I learned, represents the womb of Mother Earth and is a sacred space to ask for healing, forgiveness, hope, vision, to offer thanks, and to ask for anything else one might need in their individual journeys.

The singing and speaking moved from person to person, two of which came from other tribes—one from Oklahoma and another from Minnesota, multiple times around for what seemed like hours and the heat was almost unbearable. Twice, I leaned back to catch some cool air at a small gap where the blankets that covered the structure met the ground. When it was my turn to choose a song, all I could think of was, “Kum Bah Yah.” Afterwards, we all exited the lodges and dressed to enjoy an amazing meal in the cool desert air.

My sweat lodge experience was transformative. It was my first interaction with the tribes of my adopted State, and it set me on a new trajectory where I learned to trust my instincts, forgive my adolescent misbehaviors, and move on to a more value-centered life. To the surprise of many (including my parents), I succeeded in business and in life. I married, started a family, and, to this day, continue on my journey through the Maze.