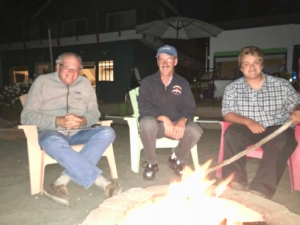 On Thursday evening, July 19, Neo and I were sitting with friend David Monahan in a seemingly idyllic location—Dave’s “cabin” (more like a beach house) on Whidbey Island, watching the sun go down over Puget Sound with the Olympic Mountains to the Southeast. Neo had gone kayaking earlier and we’d gone out for an early dinner. It was chilly and David threw together a small campfire on his section of beach. I wondered out loud what I would blog about for Whidbey Island. David suggested ocean plastics, a mammoth challenge.

A three-year mapping effort conducted by an international team of scientists affiliated with The Ocean Cleanup Foundation, six universities and an aerial sensor company published in the journal, Scientific Reports (March 22, 2018) the area known as the “Great Pacific Garbage Patch (GPGP)” is a giant floating island of plastic containing 1.8 trillion pieces of plastic weighing 80,000 metric tons situated between California and Hawaii. At 617,800 miles, it is an area more than twice the size of the state of Texas and is growing “exponentially.”

One huge problem—plastics are carbon-based polymers (made from petroleum) and so the microorganisms that decompose organic material do not understand them. Even “biodegradable” plastics do not break down in the oceans. What does happen is that when these plastics are exposed to sunlight and wave action, they break down into smaller pieces, some as small as 5 millimeters or less. These are called microplastics and they contain harmful additives and are known to absorb other harmful chemicals. If an organism consumes these contaminated plastics these toxins can transfer to the organisms’ tissues. So, shellfish and other ocean fish consumed by humans are likely to be contaminated as well.

Furthermore, the United States has been found to have the highest rate of microplastics contamination in drinking water. Fully, 94 percent of samples taken from buildings across the country, contain microplastics (at least 2.8 pieces of microplastic per 150-millimeter water sample). Last Fall, a water sample collection effort was completed across Puget Sound from the San Juan Islands to Olympia (including Whidbey Island). Out of the 44 samples, at least 41 contained at least one microplastic.

I could write a 100-page post on plastics and still only touch the surface of this problem. Plastic is so pervasive in today’s world, it won’t be eliminated easily. There are those working on biopolymers but until these are able to replace plastic fully, it is up to us to address the problem. Frankly, I think we all need to become a lot more aware of the plastics in our daily lives and get serious about recycling. Only 9 percent of plastic gets recycled. We can do better.

Earlier this month, Seattle became the first major city to ban single-use plastic straws and San Francisco became the second. Then Starbucks, Aramark and American Airlines followed suit. I hope this is just the beginning.

For more information about plastics, see: