The City of New Orleans, a folk song written by Steve Goodman and popularized by Arlo Guthrie in 1972 introduced me to trains with names. However, it wasn’t until I rode Amtrak’s Adirondack that I experienced first-hand the personality it evokes—a personality that derives from the train, the route, and the history combined. I certainly do not remember every train I have ridden, but the named trains stand out.

I like named roads for the same reason I like named trains. With the exception of the iconic “Route 66” of lore, TV and song, named roads evoke a personality not found in a simple number. On this trip, we have driven only a few (other than those named for people and specific destinations)—the Going-to-the-Sun Road in Montana’s Glacier National Park, the Icefields Parkway through Banff and Jasper National Parks and the Sea-to-Sky Highway in British Columbia.

In regard to its moniker, we drove the Sea-to-Sky Highway in reverse. We came to it from BC-97 between Cache Creek and Clinton west of the Kamloops in British Columbia and drove it in its entirety over three days.

For downhill driving in a Tesla Model 3 along fast curvy roads, once you get the hang of regenerative breaking (where one never needs to use the brake pedal to slow the car), it is a thrilling experience very different from even a clutch-driven vehicle.

The Sea-to-Sky is a driver’s road—smooth-paved with lots of plunging banked S-curves and hairpins with spectacular scenery (towering mountains, cascading waterfalls, and beautiful glacial lakes and rivers). It is a drive I will never forget. 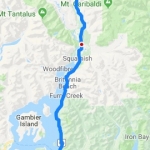 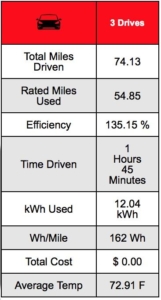