The aptly-named Camelback Mountain looks like a sleeping Dromedary with its hump-like summit and head extended forward. It is, perhaps, the Phoenix, Arizona area’s most recognizable natural landmark and everybody wants to climb it as it is a relatively quick way to get altitude to view the Valley of the Sun and is a short walk from a number of resorts.

The resorts try to do a good job of preparing tourists for the climb and there are plenty of websites providing advice, however, for some inexplicable reason, some tourists completely ignore this advice. They hike in flip-flops, they don’t carry enough water, they drink all their water getting to the top and save none for the walk down, they don’t wear a hat, they hike in the middle of the day in summer, they go off the trail, and they run on the trails, among other failings. Because of this, rescues happen daily, usually from dehydration, heat exhaustion, and heatstroke, but also from Africanized bee attacks, and falls (sometimes off cliffs).

All of these incidents are avoidable.

Yellowstone National Park is an extraordinary experience. It is a vast wilderness where animals have free reign, i.e. there are no fences to keep them out of tourist areas including roads. Some of these animals are quite large and potentially dangerous like wolves (they look like dogs, but they are not), bears (especially Grizzlies who can run 35 MPH), bison (much larger than a bovine), elk (much larger than a deer) and moose (much larger than an elk). They are not tame, they are wild and are known to attack if tourists get too close. The Park makes this fact very clear. They warn you not to approach wild animals. It is on the printed materials they pass to you when you enter, virtually all tourism websites regarding travelling to the parks and on signs at trailheads and at lodges. You really cannot miss them unless you are wantonly disregarding them.

Here is an excerpt from the Park’s advice about bear encounters: 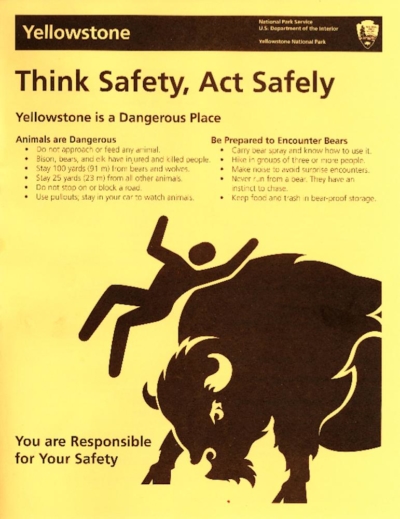 If you encounter a bear, do not run. Bears can run over 30 miles per hour, or 44 feet per second, faster than Olympic sprinters (note: bison are also as this quick). Running may elicit an attack from otherwise non-aggressive bears. If the bear is unaware of you, detour away from the bear. If the bear is aware of you and nearby, but has not acted aggressively, slowly back away.

Tree climbing to avoid bears is popular advice but not very practical in many circumstances. All black bears, all grizzly cubs, and some adult grizzlies can climb trees. Running to a tree may provoke an otherwise uncertain bear to chase you.

Some bears will bluff their way out of a threatening situation by charging, then veering off or stopping abruptly at the last second. Bear experts generally recommend standing still until the bear stops and then slowly backing away. If you are attacked, play dead. Drop to the ground, lift your legs up to your chest, and clasp your hands over the back of your neck. This technique has been especially successful with female bears that have cubs.

To ignore such warnings is either willful or simply ignorant. Yet, many tourists do just that. Bison and Elk have gored tourists when they get too close, often to pet the animal or take selfies with them and there have been deadly encounters with bears, especially Grizzlies over the years.

I spoke to a guide outside the Park who actually had an accidental confrontation with an adult Grizzly Bear. The bear charged him, veered off at the last second and then walked away. I asked him what the experience was like and he said that it was the most frightening experience of his life and that he lost all control of his bowels. He now carries bear spray with him at all times. 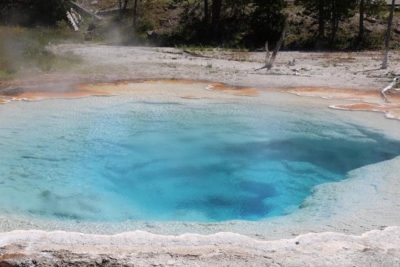 Hot, steaming acid pools are at close proximity on a boardwalk with no rails.

Much more common than animal attacks at Yellowstone are encounters with geysers and hot springs. Pools of boiling sulfuric acid can kill and even scalding 120ºF hot water and boiling mud can cause severe injuries and death. For example, in 2016, an Oregon man died after ignoring signs and fell into a boiling acid pool which consumed his entire body.

During one leg of our journey with Kevin, we encountered what has come to be called a “wildlife jam.” This occurs when tourists spot wildlife and abandon their cars to run up to take a close look. In this instance it was a mother black bear with 3 young cubs. People went simply mad. One man, put his toddler daughter on his shoulders and ran toward the animals and two teenage girls ran up the hill toward the mother bear to get a close look. Whole families ran across the road without looking for oncoming cars to get a look. It was just nuts. The bear warnings state clearly that a mother bear protecting her cubs is the fiercest, yet these tourists just bounded toward her, seemingly without a care in the world. Kevin stopped the van in the road and we watched the spectacle for a while. He said it is a common occurrence.

“Darwinism will take care of this,” remarked a member of our van party.