We departed Jackson, Wyoming on our selected route and entered the first National Park of our road trip—Grand Teton, just north of Jackson Hole, and three things became evident—the Tetons are, indeed, “Grand” and the speed limit was reduced to 45. This was not a problem for me as I often drive below the posted speed limit. I find it more relaxing and people who want to go faster can simply pass me. But, especially in a profoundly scenic area, it is nice to just relax and be able to actually take-in the scenery, take advantage of a pull-out opportunity without slamming on the breaks, and, especially for a Tesla or other electric vehicle, extend the expected range.

In fact, on the first leg of the day’s route, which also included a good bit of travel inside of Yellowstone National Park (with the same speed limit throughout the park), we experienced a surprising 140% efficiency without descending more than 109 feet. I attribute this increased efficiency to the relatively low speed and the fact that the outside temperature was just 78°F. We drove the entire distance with the windows rolled down and the air conditioning off and, with the cell phone signal having vanished entirely, a perfect day for cruising undisturbed. 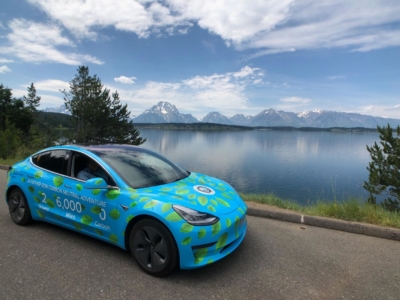 We entered Yellowstone National Park at the South Entrance from the John D. Rockefeller, Jr. Memorial Park from Teton National Park after an extraordinary drive along the eastern edge of Jackson Lake, which was mirror-like in its stillness and cruised the southwestern leg of the Park Drive to the western exit of the Park into West Yellowstone, Montana, where there is a Tesla Supercharger and a cell phone signal where we could touch base with Suzanne before diving back into the Park to check in to our lodge.

At the Supercharger, Neo went to check out a private wildlife exhibit where he had an opportunity to see a live Grizzly Bear, Black Bear and Wolves in captivity ? and I hung out with Watts Her Name at the Supercharger. Just as I was about to begin cleaning the car, another Tesla Model 3 pulled in and a father and two sons emerged. The two sons were Jeff and Christian, YouTube stars of JR Garage with nearly 900,000 subscribers. They immediately started vlogging and, I think they caught a bit of Watts Her Name in the background. I was able to text Neo and get him back to meet them. It turns out they are interested in possibly moving to Phoenix and getting their pilot’s licenses. Neo chatted with them for a time and exchanged contact information. The Dad sure looked familiar to me and as it turns out, he managed the MicroAge Computer stores in Arizona in the 70s. I am pretty sure I bought an Apple Computer from him.

It is always interesting to meet fellow Tesla Road Trippers. When was the last time you struck up a meaningful conversation at a gas station? Not enough time, right?