Yesterday, Day 9 of the trip, we first went to the Hill AFB Aerospace Museum in Ogden, Utah as planned. Here, Neo discovered an enormous military plane he had never heard of – the C-124C Globemaster II – a Vietnam Era troop carrier with a double-decker cabin for 200 troops and a cargo bay that could accommodate a tank (see photo) among other aircraft. 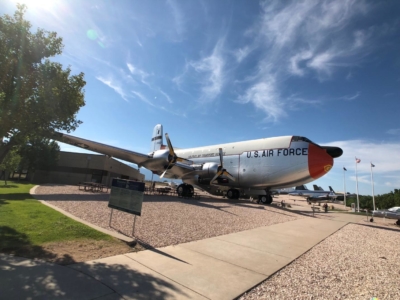 For the next leg of our day’s drive, we had planned a route using both Roadtrippers mapping software and Tesla’s online software, but were unable to plug that route into the car’s computer. Watts Her Name kept wanting to go on the Interstate and that was not our goal as we prefer scenic routes. We knew where we wanted to go, but could not make the car go there using the car’s GPS. This created a conundrum as our selected route appeared aggressive and because we could only plug destinations on the GPS, we would have to do that in segments. Ideally, Tesla needs to update their system so drivers can plan a trip on Tesla’s online software and then upload it to the car with multiple waypoints to get the scenic route desired.

So, we chose another route that seemed more doable by simply looking at the map and choosing waypoints as we went. It seemed likely that it would not be achievable and be highly risky during winter, but the speed limits were much lower on the new route, allowing us to take our time to explore rural Idaho and Wyoming. 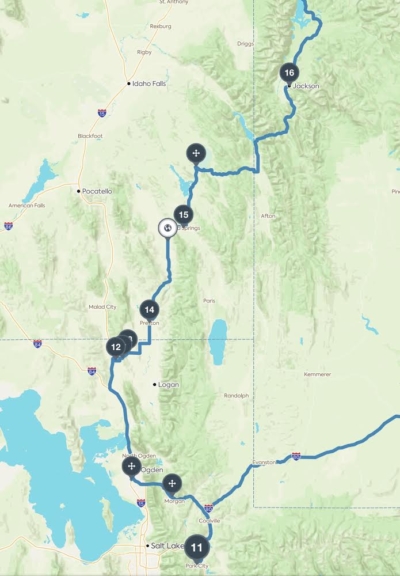 Using the car’s GPS with segmented waypoints, the new route took us first on a road with no lines leading up into an elevated remote area and then to a goat path that Watts Her Name said was the road. However, there was a route around the goat path and we were soon on our way. Over the hills and down to the main road, we were essentially off the map but it was clear we were headed in the right direction. Eventually we reached Jackson with 27% energy still on the battery which confirms the original route was likely doable.

However, the revised route we took on mostly two-lane rural roads was beautiful with interesting challenges and interesting facts. For example, we drove through Preston, Idaho, home of Napoleon Dynamite and discovered the town of Soda Springs, where carbonated water comes out of the ground in springs. Cattle grazed alongside the road and at one point, three bovines stopped traffic in both directions as they began moving across the road. When the largest one, a black Angus, saw Watts Her Name, he stopped and stared, moving his head about, apparently to try and understand what he was looking at, and then continued to cross the road keeping his eyes fixed on us. A few miles later, a dead bovine on the side of the road and a pickup truck with its front end smashed reminded us to be vigilant.

We also had an opportunity to use Facebook Live with friends and family, but rural connection issues made it difficult and we had to end it early. The experience was as if everyone watching was in the car with us as we interacted with them. Really cool!  We will try again on our teslaroadtrip.blog Facebook page later in the trip. 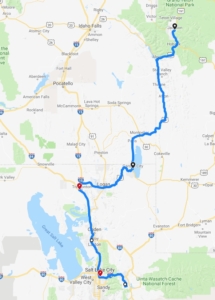