In the summer of 1982, I drove my Volkswagen Vanagon up to Aspen, Colorado to visit my parents, who were conferencing at the Aspen Institute. I elected to traverse the Navajo Nation Indian Reservation on U.S. 160 (a lonely 2-lane road) from Tuba City to Teec Nos Pos. It was about 104ºF, and I was out there in the mid-day, in the middle of the high desert when I discovered that my vehicle was losing power. With my foot pressing all the way down on the gas pedal, I was getting, maybe, 35 MPH and dropping. I pulled over onto the paved, dusty shoulder and got out. Not being particularly mechanically inclined, and phoneless (i.e., 1982…no cell phones), I was stuck, basically waiting for someone to help.

After about an hour in the blazing Arizona sun, an old pickup truck stopped in the middle of the lane heading the opposite direction and the driver, a 35ish Navajo man wearing a dark blue shirt and a straw cowboy hat emerged from the driver seat, crossed over the lane and asked in what seemed like a heavy accent, “what’s up?”  There was another native man in the passenger seat and two more crashed in the truck bed along with a few bales of hay. I explained what happened and he nodded and asked, “you got pliers?” I explained that I had no tools except a jack. He went to his tool kit in the truck and pulled out a pair of needle-nose pliers, got a wire cutter and cut a piece of baling wire off the hay bale. He walked back to the van and motioned for me to get down on my back and pull myself under where the gas pedal was. He seemed to know what the problem was.

He got down on his knee and pointed up under the pedal to show me where a braided cable that connected the pedal to the accelerator was frayed almost to the point of unravelling completely.  This was the throttle cable and it looked not much different than the brake cable on my bicycle. The fraying had weakened the connection between the throttle and the pedal mechanism, making it less effective. He handed me the pliers and the piece of baling wire and motioned to me to attach one end onto the accelerator and then pull hard on it to attach it to the pedal such that when I applied my foot to the pedal, there would be a stronger pull on the accelerator.

So, there I was on my back on a very hot pavement trying to refashion a new throttle cable and then suddenly, I heard it…the unmistakable sound of a rattlesnake, I jerked my head up sharply and banged it on the bottom of the car and then heard a lot of laughing. I slid out from under the car and up on my knees to see the man who had handed me the tools, standing there with a key ring full of snake rattles and he was shaking it and he and the other three men now standing around watching me, were laughing. I pointed at the rattles and looked at the men, smiled and then joined in the laughter of the joke they played on me.

About ten minutes later, I completed the repair and went to hand the pliers back to the man, and he said, “keep it, you might need it.” I thanked him and handed him $10 for the pliers but he would not take the money. We said our farewells and we departed in our opposite directions. After the repair, the vehicle performed better than ever. Where my top speed on the van before the trip was 55 MPH, I could now hit 65 MPH with no problem. I drove the van into the San Juan Mountains up many steep grades to Aspen back to Phoenix. I decided not to tell the VW dealer about it and had a much better vehicle from then on.

Having been raised in the East, this was my first experience with American Indians and it taught me something about the generosity of the people. Since those days I have acquired lasting friendships with other Native Americans and value these relationships greatly.

Two years ago, on my Four Corners road trip with Stan Perry, we had the opportunity of visiting with EMSL cohort member Jeremiah Powless in Farmington, New Mexico, just east of the Navajo Nation. Jeremiah gave us a tour of the Navajo Pride Farms, the largest contiguous farm in the United States. 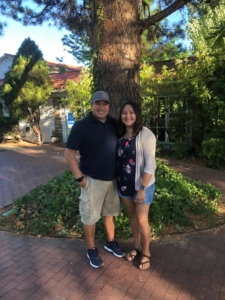 Today, Neo and I arrived in Farmington, New Mexico, yet again, and Jeremiah and his wife Theresa, now living in Albuquerque, came up to greet us and have dinner. At dinner, Jeremiah took special time to explain to Neo the Navajo concept of Hózhó, perhaps the most important sacred word in the Navajo language. The exact definition is difficult because it cannot be directly translated into English. Jeremiah described it as peace, balance, beauty and harmony—to be at one with and a part of the world around you.

After a long day’s drive, it was certainly a nice welcoming from this delightful couple.

“Be still and the Earth will speak to you.” – Navajo Proverb