“Only those who will risk going too far can possibly find out how far one can go.” – t.s. eliot

It is said that “range anxiety,” the state of fear that EV drivers experience when thinking that their battery could run out of charge and strand them far from a recharging station, is scaring prospective EV buyers away. For those considering buying an electric car who are worried about so-called range anxiety, I am here to tell you that it is a state-of-mind, not a real concern. It just takes some planning. One of the goals of our road trip is to demonstrate that one can drive an electric vehicle on a challenging route off interstates and on the outer reaches of Tesla’s Supercharger Infrastructure. Therefore, we have chosen a fairly aggressive route to prove our point.

Planning a Tesla road trip is not much different from planning a road trip in an internal combustion vehicle. First, one needs a route planning app. For travel planning, I used Roadtrippers, a web and mobile travel planning platform that provides easy-to-use web-based routing software with iOS and Android versions. Roadtrippers offers both a free service and a new fee-based version with more features for only thirty bucks a year—a bargain considering what is offered (offline maps, up to 150 waypoints, and live traffic conditions). Both versions, however, offer hotel discounts, places of interest, and compelling packaged road trips for those who are looking for pre-designed adventures. Roadtrippers makes it simple to design your custom route with multiple waypoints so you can travel to out-of-the-way places and along scenic roads. However, it does not offer an overlay of charging infrastructure, so until EV chargers are as ubiquitous as gas stations are today, we also need an EV charger planning app or two.

Once you know where you want to go and how you want to get there, you need to plan where you will charge. There are multiple apps for this including Tesla’s own online version of its on-board computer. Tesla’s on-board routing software knows where all of the superchargers are. You simply enter your destination and the car’s GPS tells you where to charge and for how long. It will also notify you via the Tesla smartphone app when you have reached the desired energy level to proceed with your trip, so you can plug-in and then go to a restaurant, having the peace-of-mind knowing the car will tell you when it is ready to go. This software is great for interstates and the most commonly travelled roads, but the on-board software is only good for the most expedient route. It will not let you input waypoints or upload a map…yet. For a long, intricate road trip where one might want to traverse a more scenic route, you need to input sorter legs, at which point you will need EV charger planning software. I use Tesla’s online app and evtripplanner.com.

Tesla’s free online app “Go Anywhere” contains only Tesla infrastructure. It is a bumped-up version of the car’s own computer mapping service (adding some destination chargers as an option). You enter your Tesla model, destination, and waypoints and it estimates where you will need to charge, but not for how long. The length-of-charge feature is unique to the car’s onboard computer.

Third-party EV Trip Planner is a more robust subscription service that route-plans for every Tesla Model, a few Nissan Leafs and the 2012 Ford Focus. Unlike Tesla’s app, EV Trip Planner allows you to plug in variables (like external temperature and payload), which may affect range and you can also display non-Tesla chargers. Again, to get your exact route, you need to plug-in waypoints.

As of this writing, Tesla boasts 1,261 supercharger stations with 10,021 superchargers worldwide and Elon Musk recently tweeted that number will double in the next two years. Tesla also has a growing Destination Charger Network of hotels, restaurants and other businesses that have installed the kind of chargers you would put in at home (between 7.7 and 19.2 kW). Tesla’s online Destination Charger Map helps you find hotels and other places of business that have installed Tesla chargers on your route. I support these hotels and businesses by patronizing them and then telling them why. On our road trip, we will post such businesses with comments on the Backseat section of our blog site, and indicate whether they have a Tesla destination charger or third-party charger.

For example, we will be staying at Casa Blanca Inn in Farmington, New Mexico on our first night. Stan Perry and I stayed there two years ago on our Four Corners Road Trip. The rooms were quite comfortable, breakfast was excellent, and the staff was very friendly. The two Tesla chargers were right out front.

And, because there are no Tesla Superchargers in Durango, Colorado, for the nights of July 2 and 3, we will be staying at the DoubleTree by Hilton Durango. 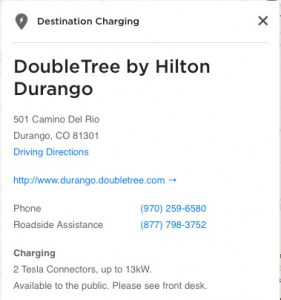 For our July 1 – 4 route, the Destination Charger at DoubleTree by Hilton in Durango is not critical, but it certainly is convenient, as there are no Superchargers in Durango presently. A full charge at the Farmington Supercharger, or at the Casa Blanca Inn, will easily get us to Durango and Telluride.

However, our trip from Jasper, Alberta (Canada) to Whistler, British Columbia (Canada) on July 17, presents more of a challenge. The route that the Tesla app suggested (Map 1) was to go back the way we came and take the TransCanada Highway (413 miles). This backtracking route would take 9 hours to get us to the Kamloops Supercharger. The route I chose is more direct and would get us to the Kamloops Supercharger in just 5 hours.

However, according to the Tesla online app, we would run out of energy on the way. If you look at the app screenshot (Map 2), it shows that my chosen route is only 283 miles. Our Tesla Model 3 has a promised range of 310 miles and, according to Tesla engineers, the Aero wheels we purchased with the car can extend that range up to 10%, which would put us comfortably in Kamloops without an interim charge. But if you look down in the lower left-hand corner of the Map 2 screenshot, it reads, “We’re working on getting you there: view supercharger locations coming soon.” What this means to me is that either the app is wrong, or it is not telling the whole story. 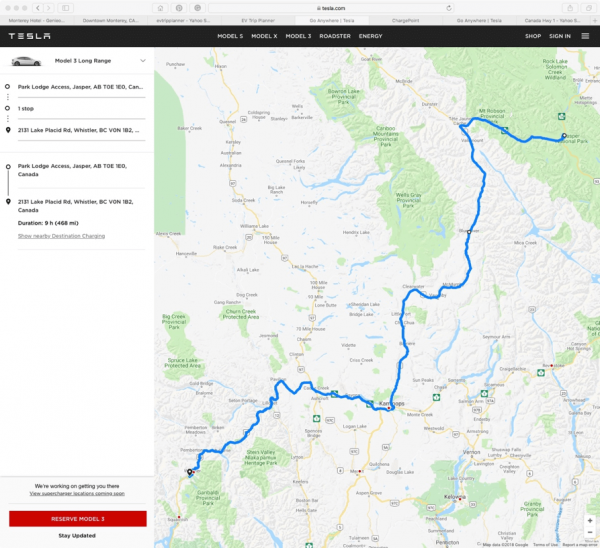 Map 2 – my choice route from Jasper to Whistler

Canadian winters are cold, with average daytime temperatures in this area of 23ºF (-5ºC). Cold temperatures significantly reduce battery range. I’ll bet that is what the app is not telling us, since there is no variable to adjust for seasonality.

So, I contacted Tesla Owner groups on Facebook and got some really great advice from fellow Tesla owners in Canada who explained that it is, indeed, not doable during winter, but should not a problem during summer. This is also where the EV Trip Planner app is helpful. Adding the variable for external temperature makes the difference.

Regardless, this adds a little drama to the day and we will be collecting a lot of data here to prove my point.

Note: ChargePoint is the largest open EV charging network in the world. They have both an online charger map and a smartphone app. If you are driving a different EV (like a Chevy Bolt, Nissan Leaf, Ford Focus Electric, or Jaguar I-Pace), the third-party chargers are your charging infrastructure, as currently, Tesla’s Superchargers are proprietary and only charge registered Tesla electric vehicles. Currently, there are no ChargePoint chargers on my chosen route, thus demonstrating the advantage Tesla has over other EVs.

“Range Anxiety? We ain’t got no stinkin’ range anxiety; we drive a Tesla!” – @tesla3roadtrip, on Twitter