Stanton Perry, my driving partner for an epic 1977 on-and-off-the-road trip, hailed from Palm Beach, Florida. We met in 1971 at Avon Old Farms School, the boys’ boarding school in Connecticut where we became fast friends and then life-long BFFs. 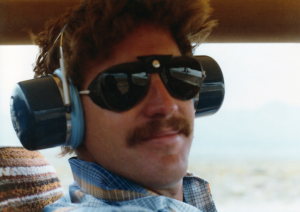 In those days, Stan spent his Thanksgivings with our family and then, after my folks bought a condo in Palm Beach for my grandmother, I spent most of my winter and spring breaks in Florida. Stan and I were also college roommates at Syracuse University in 1975. Though we grew up in very different circumstances, we both had absent fathers, lenient mothers and a high tolerance for risk, making us very compatible friends. 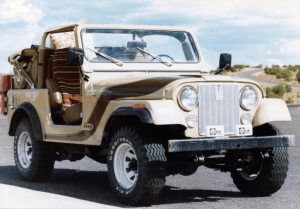 In July of 1976, I moved to Arizona and shed my 1973 Oldsmobile 442 for a new blue Jeep CJ-7 and then set about exploring my new state, both on and off the road. A year later, Stan followed and bought his own Jeep CJ-7. The day after Stan received his new Jeep, we left on what was to become our 1977 Epic Road trip across the American West—our last such adventure before getting serious about life. I was 23 and Stan, 21. We took to the road in Stan’s new CJ-7, who we named Bob (mine was Alice) and camped out every night of the three weeks (save one night at a Howard Johnson’s Hotel in Salt Lake City). The plan was to keep off interstate highways as much as possible, explore interesting and scenic roads, visit my parents who were summering at the Aspen Institute, and visit my uncle and cousins in northern California. We made no advance reservations; we just took to the road and winged it.

It was our “fear and loathing” trip, fueled by gasoline and beer; our last blast before we would have to get jobs and join the adult world.  We camped in truly amazing places—some accessible only by Jeep—got kicked out of at least one restaurant, nearly got struck by lightning camping atop a mountain, and in one instance, nearly died in a hole…literally. Here is what happened…

Owning a Jeep CJ is a ticket to explore dangerous roads that are, for the most part, not maintained for public use. Having had my Jeep for a full year before we embarked on our trip and having spent some time exploring such roads and, in some cases, bounding through the desert on no road at all, I sort of knew what to look out for.

After we had spent quality time camping in the San Juan Mountains of Colorado and stayed in our lone hotel in Salt Lake City, we headed west to Lake Tahoe along Central Nevada’s two-lane U.S. Route 50, dubbed, “the loneliest road in America,” by Life Magazine. Somewhere along that road, we arrived at a state historical marker number 202 posted by the Reno chapter of the Daughters of the American Colonists, which read, “FAIRVIEW 1905 – 1917, 1-1/2 MILES SOUTH” signifying an off-the-road ghost town, “that boasted 27 saloons, hotels, banks, assay offices, a newspaper, post office and a miner’s union hall.” We were intrigued and decided to leave the highway to check it out.

Now, for our younger readers, please note: there was no way out in the middle of “the loneliest road in America” to call anybody to say, “hey, we are going off the road in the middle of BFE to explore a ghost town.” In fact, nobody knew what highway we were on. All anybody knew was that we were on our way to California from Salt Lake City. In those days, there were no mobile phones, just public pay phones at gas stations, restaurants and rest stops. It was, actually, not until 1983 that the first mobile phones went on sale in the U.S. at almost $4,000 a pop. We did have a CB Radio, however, but neither of us thought to call a trucker, and have them contact their office to call our parents and tell them where we were, not that they or we would anyway, so off we went. 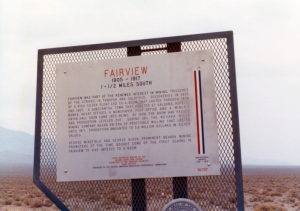 We started off by folding down the windshield, which one can do with a CJ. We rolled back the canvas top, put the canvas doors behind the front seats, disengaged the windshield and folded it forward to rest on the hood supports. This gave us a clear and unobstructed view of everything around us, except that it did make it more difficult to see the road in front of us—a technicality we ignored, cuz we were just cruising on a lonely, historic road toward a ghost town in the middle of the desert; what trouble could we possibly get into? After a good distance, we noticed what appeared to be mines dug out of the rock cliffs along the driver’s side of the Jeep, but no big city, no big anything. That is when we decided, “hey let’s drive off the road and just bushwhack through the scrub.” Great idea… 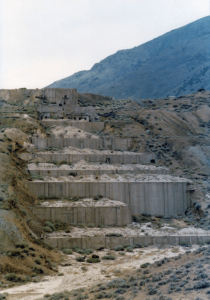 View of the Remnants of Fairview, Nevada Mining Operation from Bob

Stan was driving, and I was navigating, keeping a watchful eye on the desert head of us for large rocks which might cause damage to the vehicle. As we rounded a corner, off to the left of us was the enormous, concrete foundation of a multi-tiered milling facility on the slope nearby. It was the first sign we had seen that there was a substantial mining operation there and Stan just kept on driving as he was looking at it. I was also taken by the view but quickly glanced back to where we were going and suddenly saw a gaping hole in the scrub right in front of us. I yelled as loud as I could, “STOP!” Lucky for us, Stan slammed on the brakes and we stopped just inches from the edge of a vertical mine shaft large enough to swallow the entire vehicle and then some. We unbuckled and got out and here horrified to find that the opening had no fence, no cover, no nothing to prevent someone from falling in. Using our dinky flashlight, and peering into the abyss about twenty feet down, there appeared to be a decomposed wooden trestle with some cabling likely used to haul up ore many years ago. We dropped some large rocks over the edge and it was very long time before we heard anything and then a distant “sploosh” of the rocks hitting water. So, we very carefully backed Bob up and went back to the gravel road, took some photos of other old mine buildings and decided that maybe we should be on our way…

On the return to the loneliest highway, we could just not stop thinking and talking about what would have happened had we gone over that edge and plunged down into that dark, likely scorpion and black widow-infested vertical shaft. Silver mining shafts are often hundreds to thousands of feet deep. If we had tumbled down and got wedged in the shaft and survived the plunge, it would have been a slow, horrifying death. No one would have known, and we would have simply disappeared. I had chilling nightmares for months.

For our current trip, driving in a Tesla Model 3 Long Range, I have selected many great driving roads, some risky, though all maintained for public use, including the following five (descriptions are taken, sometimes directly, from the dangerousroads.org website):

My tolerance for taking physical risks certainly has receded a lot since my adolescence, but I still like driving a fast car on a twisty road. As I contemplate taking my testosterone-fueled 17-year-old son down these “dangerous” paved roads, I reflect on my own experience and wonder…who should drive?