Skip to content
Home/Road Tripping Through the Years
Next

Road Tripping Through the Years

“I was halfway across America, at the dividing line between the East of my youth and the West of my future.” – Jack Kerouac, On the Road

According to my mother, two books published in 1957 that had a profound effect on America, also had a consequential effect on my family. Atlas Shrugged by Ayn Rand, Mom reasoned, set my sister on course to be a Wall Street executive and On the Road, by Jack Kerouac, set me on course to drop out, leave home and make my own path in the world.
– –

My mother loved road trips. The first family road trip I can remember took us through the Amish countryside of Southeastern Pennsylvania in our 195 Plymouth Station Wagon. It had a rear-facing back seat and I loved watching the world go by in reverse. In the 60s, we ventured north to the Adirondack State Park, to Montreal for Expo ’68, to Connecticut and Massachusetts to visit family, east to Long Island south down the eastern seaboard to Miami Beach, Florida and in our teens and afterwards, to Europe through England, France, Spain, and Portugal.

Like many of my testosterone-infused age cohort, I was a lover of fast cars even before I learned to drive.  I attended the New York Auto Show every year, drooling at the sleek new concept cars and dreaming of the day when I could cruise down the highway in a sleek, fast sports car.

And I always wanted to go west as I long as I could remember. The American West and California held a special fascination for me. From boyhood fantasies of cowboys, wild horses, mountain peaks, geysers, deep canyons and expansive deserts to Woody Guthrie’s Do Re Mi & This Land is Your Land, The Mamas and the Papas’ California Dreamin’, The Beach Boys’ California Girls, and The Doors’ L.A. Woman and The End, the West called to me. But it always seemed out of reach. Mom took us North, South and East, but never West.

At the age of nine, a new kid my age moved in up the street from me and we became fast friends. Steven Misiaszek taught me how to ride a bicycle thus granting me mobility. In sixth grade, we coasted our Sting Rays down Lounsbury Road as if stop signs never existed making the sharp 90-degree turn to the twisted Old Post Road and generating the speed necessary to coast up the hill past Brook Street into the Village of Croton-on-Hudson past Pop Berger’s for a hard right onto Maple Street for the final leg to Pierre Van Courtland Middle School. In 6th grade, Steve and I were inseparable, and we dreamed of the day when we would drive together across the country on a road trip West.

When I finally got my driver’s license at age 17, Mom handed-me-down her ’68 Oldsmobile Toronado, a massive two-door coupe with a 455-cubic inch V8 and gave me a gas credit card, virtually granting me an unlimited ability to explore. Freshly paved, winding two-lane country roads created a Le Mans-like experience around the numerous reservoirs and through the mostly deciduous forests of Northern Westchester County, New York, where I grew up, especially Routes 129, 100, 35 and 22; and fast, narrow and curvy four-lane parkways like the Taconic and the Saw Mill River made the round trips from New York City and weekends trips up to the Adirondacks a thrill ride. It was a teenage driver’s dream.

The Toronado was my friendmobile and I took to the road with friends at nearly every opportunity until I graduated from high school when it was replaced with an Oldsmobile 442. I started college in the Fall of 1973 at Syracuse University in upstate New York and a year later, friends Steve and high school pal Stanton Perry joined me there. Over the next three years, we put 96,000 miles on the 442 on various road trips through New York, Connecticut, Pennsylvania, Massachusetts and down the coast to Palm Beach, Florida.

In May of 1975, Steve and I finally took our road trip West in my 442 to Arizona to visit college friend Bruce Reiter. We explored the state from the Grand Canyon to Mexico then took a short hop to L.A. just to say we’d been there. For the return, we took I-40 through Northern Arizona, New Mexico, the Texas panhandle, Oklahoma, and I-44 through Missouri (essentially the third stanza of Nat King Cole’s Route 66 in reverse), then I-70 through Southern Illinois, Central Indiana, Ohio and Pennsylvania. Driving the interstates, however, were quite tedious, mostly straight 6-lane highways congested by large eighteen-wheel trucks. I knew I would have to explore off the interstates to see the kind of “West” I’d longed for. We’d be back.

That Fall, after four semesters of a declining grade point average and no idea what I wanted to study, I dropped out and took a job in New York City where I was not happy. I had grown up in the woods and spent five summers at summer camp in New York’s Adirondack State Park, an immense wilderness area. Hiking concrete and steel canyons just wasn’t my thing and I yearned for the natural world. I returned to Arizona for my first work vacation the following June and upon returning home, quit my job, packed up the 442, and moved to Phoenix. That was July 1976.

Off the Beaten Path

In Arizona, I traded in the 442 with 104,000 miles on it for a new Jeep CJ7 and began to explore off-road jeep trails, ghost towns and forgotten roads across the state. The following year, Stan graduated high school and joined me in Phoenix. He bought his own Jeep and the following summer, we embarked on a three-week on-and-off-road road trip exploring off interstates through Arizona, Colorado, Utah, Nevada and California—camping out nearly every night, visiting state and national parks, monuments, ghost towns and friends and family throughout the West. It was a magnificent adventure.

There were many more road trips in the Jeep and subsequent vehicles with Stan, Steve and others but eventually the frequency winded down after I started in business and needed conventional automobiles for sales and delivery. In 1982, after two failed attempts at entrepreneurship, friend Dan Schweiker and I founded the China Mist Tea Company in my kitchen.

In 1992, I married Suzanne and success in business brought back that childhood desire to speed down the highway in a sleek, fast sports car. First there was a “Speed Yellow” Porsche 968 Cabriolet and then a Red Porsche 911—one of the new Targa’s with a sliding glass roof. Road trips during this period were longer and faster.

Just a year into my Porsche 911, General Motors brought out the EV1, the first commercially available electric car of the modern era and in 1999, I sold the Porsche and became one of the thousand or so EV1 “owners” in America. It was quiet, clean (zero-emission) and quicker 0-60 than the Porsche 911, but with a range of just 70 miles, not a road trip car. I drove the EV1 for three years until GM ended the program, but the EV Genie had been let out of the bottle and I knew it was just a matter of time before a road trip worthy electric car would be available.

Then, in 2009, after 27 years in business, I returned to Arizona State University (ASU) to finish my undergraduate degree. I bought a 2013 Tesla Model S—essentially the road trip worthy return of the electric car. I earned a graduate degree in Sustainability Leadership at ASU’s School of Sustainability in 2016 and three months later, Dan, four years my senior, announced that he wanted to retire. We had been friends and business partners for 34 years and we sold the company in October of that year.

On the Road Again

That summer, our son Neo, then 15, spent 3 weeks at an Outward Bound Wilderness Camp in Utah and I invited Stan (now living in Southern Cal) to accompany me on a 6-day electric road trip to fetch him back home. We took to the road in a new Tesla Model S 90D nearly forty years since our epic road trip through the West in his Jeep. This would be my first real road trip since the kids were born—a Four Corners loop in one week with overnight stops in Farmington, Moab, Denver, and two nights in Santa Fe. It really was nice to be back on the road again.

A year after the Four Corners trip, I was itching to back on the road. Although working on some sustainability projects, I was essentially retired and had a lot of free time. That Fall, I was lamenting that Neo would be 17 years old in 2018 and that it would probably be my last opportunity to spend some good alone-time with him that I got it in my head that Neo and I could do a road trip together. Neo loves to drive (with the same inklings I had when I was 17); and so, I began planning a father-son road trip for Summer 2018. 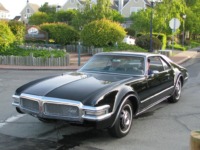 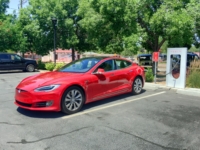 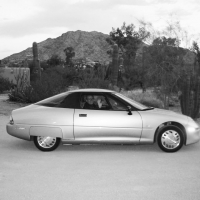